I've been bouldering consistently since the circuit breaker lifted in Singapore and I've gotten somewhat better in my strength and technique. Since I climb at many different bouldering gyms, my mind unconsciously links each new technique I learn to the place that it first clicked for me. I found that pretty fascinating, so I decided to write some down here. Enjoy! It was at Climb Central that I finally gained the courage to work on climbing overhangs. While I had been climbing somewhat frequently before the circuit breaker, I had tried some steeper overhangs and failed quite spectacularly as I just couldn't stay on the wall. It led me to believe that I simply didn't have the upper-body strength required to attempt them.

I knew that I needed to "engage my core", but never understood what that meant until I finally decided to give overhangs another shot during one of my sessions. I grabbed the starting holds, lifted my feet off the ground and squeezed my entire body as hard as possible and voila! I managed to grab the next hold! Perhaps I just got stronger over time, or that I was fresher that day, but the feeling of "engaging my core" finally stuck and I managed to top the route.

Our first visit to Fit Bloc was on a whim. We had just finished up with work and were itching for a climb, so we ended up searching for the nearest gym and just showed up without a booking. They were kind enough to let us in (instead of shooing us away) and it was here that we got our first taste of slab climbing.

While I prefer climbing overhangs since falling feels much safer, I find slab climbing to be much more interesting. The "problem solving" aspect of climbing shines through much more in slab routes, which makes solving them much more rewarding. Balance and flexibility become equally as important as strength. They also provide a much-needed break on the fingers and arms, while still providing a great challenge. 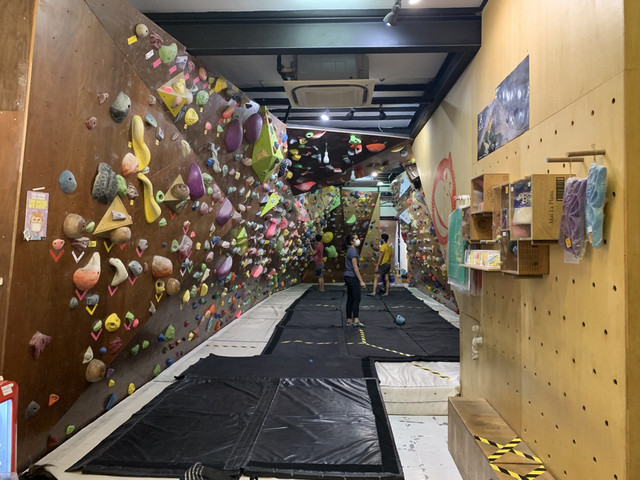 Oyeyo is a cozy bouldering gym with relatively unique routes compared to the rest of the gyms in this list. It's walls are way shorter than most, so route setters have to work around this by "compressing" routes vertically, At least, that's my theory to explain the ridiculously cramped starting positions for most of the routes there.

The routes mostly start from a sitting position on the ground, which you have to pull or push yourself out of the start your climb. The first time I was there, I grew frustrated because I wasn't even able to start most of routes, which for the most part looked doable. Nevertheless, I pulled through (haha get it?) and flagged, smeared and pressed my way into the routes at Oyeyo.

Over time, I grew comfortable with these uncomfortable starts, and I find that my route starting has seen improvement across all the gyms, cramped or otherwise. Classic case of just do it if I do say so myself. 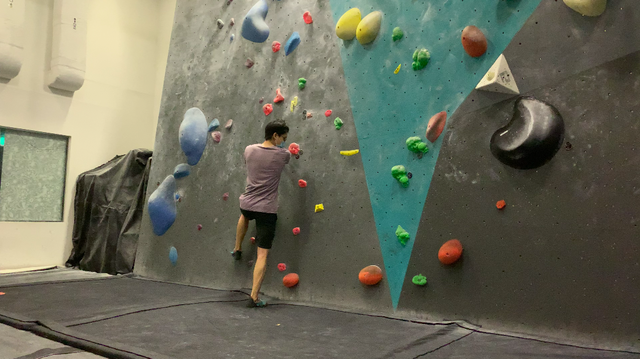 I was introduced to Boulder World by my friend. I remember being in awe of how large it was compared to the other gyms the first time I saw it, and was super excited to try out the tension board there. The tension board is essentially a board with wooden holds, meant to train body tension and engagement during climbs. You could connect to it using an app, and select different routes based on skill level.

After trying out a few, I realised that one of the key differences in the routes on the tension board was the many high steps they required. Most of the time, the footholds were extremely high, and would require stepping high into a cramped position in order to spring towards the next handhold. It was through these repeated high steps that I got comfortable with the move, and I've seen some improvements in normal climbing through simply being willing to take them and step hard.